Ive always thought that you can best judge a city by taking a good walk around it early in the morning. You need to get out really early though, around five thirty, before the cleaners have managed to cleanse the streets of the nights various passions. Its the theory that a chain is best judged by its weakest link and at such a delicate hour, as a city stirs into life, all of its frailties and truths are laid on the pavements to be seen  and often trodden in. In New York Ive walked all the way from Battery Park, through Washington Square and on up fifth to central park  five miles in all. Ive walked nearly every street in central London and jogged through most of its parks, and one of my favourites, a walk from Union Square San Francisco up over Nob Hill, to get a view of Alcatraz, and then down to the Presidio. A good walk often gives the brain a chance to sort out most issues in life. But today Im in Lisbon on an early July morning and its a city bathed in a warm sunlight, made even more pleasant by a gentle atlantic breeze. First impressions are not good however. The streets appear to be mostly made up of sixties concrete blocks of one sort or another with filthy air conditioning units hanging out of most of the windows. Graffitti adorns the majority of buildings, in fact the graffitti adds the only element of real life to the brutal and failed architecture. I find one rather pleasant and large park, nestled between two busy roads. Some statues, lakes and a few small buildings give glimpses of a city of elegance, from a time long past. 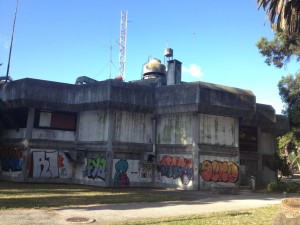 A city that has now mostly been wrapped in a concrete overcoat. The beauty of even this green oasis with its wonderful ancient trees is however marred once again when I come across a huge concrete blockhouse of a building, looking like it has been dropped into place from above by the mother ship. Its just simply inhuman looking. Again it has been adorned in colourful and rather poetic graffitti. The building looks like some sort of genetic mutational cross between an oversized public convenience and the fuhrerbunker in its final days. I just stare and wonder what the architects of a generation ago were thinking? Was there really that much drug abuse in the sixties? Gropius gone very badly wrong.
city branding julian stubbs lisbon