Place Branding: Liverpool. City on the UP

Im lucky enough to be visiting one of my favourite cities in the world – Liverpool. I’m here meeting some of the people behind the branding of the city and carrying out some research for my next book on Place and Destination branding. Now, not only do I love the local football team, but I also love this Victorian port city built on the banks of the river Mersey. It was once the commercial gateway for the British Empire, home of The Beatles, two cathedrals and a famous football team (or two depending on your point of view).

However, in the last seventy or so years, Liverpool has seen difficult times. Being heavily bombed in the second world war and then devastated by recession during the 1970s, has made it a city with true grit. The city has refocused itself in recent years, making significant investments in a massive urban renewal programme. In 2008 the city was rewarded by being named European Capital of Culture. Walk the streets of the city and you realise Liverpool still has a way to go but it is now heading in a confident new direction. Liverpool is part of a wider region called Merseyside and according to Liverpool Vision, the organisation behind the Liverpool 2008 brand, there has always been confusion when talking to external and international audiences about Merseyside. Liverpool Vision recognised the strength they had in the city of Liverpool and developed it as an attack brand to help market the whole region. Liverpool did not have its own strong brand identity up to that point. However being Capital of Culture gave it an opportunity to create a new brand for that year. There was a need to ensure that the positive work the region had started, was then continued after the year as Capital of Culture, so new branding work was required. Stakeholder driven The city saw stakeholder involvement as a key part of their work. Liverpool already had an influential group called Liverpool First  a group of important stakeholders consisting of major businesses, governmental organisations, public sector agencies, as well as representatives from voluntary and community groups. These groups all worked together to discuss important issues about the area. It was Liverpool First who commissioned Liverpool Vision to develop the new brand. Therefore stakeholder engagement was already achieved. Leveraging the citys strength Research established that the city had an impressive number of icons to leverage in developing the citys new brand identity. As well as worldwide strengths associated with The Beatles and football, Liverpool is recognised as a city on the up. Extensive regeneration projects combined with warm welcoming people and a unique waterfront, helps it to stand out over other northern UK cities and destinations. A new brand logotype was developed along with launch events and a new web site, all of which were supported by a media campaign and extensive PR work that encouraged local businesses to use the new brand image in their own advertising. Its still early days for the Liverpool brand, but the city has already seen success in companies working with their new identity and downloading it from their website. The question is now what comes next. Brands are about more than just logotypes and Liverpool has to re-asses its role not just in a northern UK cities context, or even a UK one, but more importantly as a world class city. I believe Liverpool is a city on the UP, and I think it’s best days are yet to come. Check out the Liverpool brand at: www.itsliverpool.com This blog is mostly reproduced from Wish You Were Here the first book on Place and Destination branding by Julian Stubbs. Wish You Were Here Too will be out in Spring 2014. 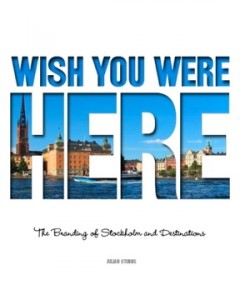