July 4th, as we all know, is a rather special day. And for me its special for a couple of good reasons. Firstly its the day our colonial cousins mistakenly threw off the rule of mad King George and us British. It was an obvious mistake by the yanks as since then they have never managed to win anything at cricket and their football team, or soccer as they call it, is absolutely rubbish. Just think what they might have achieved. I write this knowing full well that a few of my American friends will respond with outrage at these remarks and want to correct my lack of appreciation and understanding of their own culture and what they call sports (these are generally activities that no one else in the world wants to play, so that they can declare themselves world champions). Well, a good number of Americans also dont get irony too well either and I happen to understand the American mind rather well thanks to my American wife, who happens to be from the fine US state of Wisconsin. 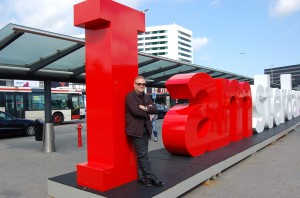 Julian Stubbs. Positive to Amsterdam? Yes, I am

Which brings me to the second, and far more important reason that July 4th is a special day. It also happens to be my wedding anniversary. Yes, we were married on independence day. Now if that isnt irony enough for anyone call me Samuel Adams. Anyway, choosing July 4th as our wedding day seemed a good way of remembering the date  and it seems to have worked up to now. Except today. Ive not forgotten the date, but Im not with my dear wife, but in Amsterdam. Yes, Amsterdam I hear you say. Now Ive been in the Netherlands several times in the last few weeks. We have several Dutch clients and a highly active UP group here. Ive been down to Haarlem and run a masterclass in Place Branding, given speeches  most recently at MARCOM 13 the main Dutch advertising symposium, as well as run Place Branding workshops, the last one being for the municipality of Utrecht. Today Im in Amsterdam as a guest of the citys marketing group, the people behind the I amsterdam brand. Ive been asked to give a speech to the citys marketing partners, around five hundred people, giving an assessment of how the I amsterdam brand is really doing. Its an intriguing question and Amsterdam is an interesting and unusual place. But Ill come to that later. Now, at UP we work with our Place Brand Scorecard covering the key categories when it comes to judging the important areas and assets that a place or destination has to offer  or not. For the Amsterdam presentation we decided to concentrate on only a handful of the eighteen categories. Identity The I amsterdam brand is one Ive always liked a lot. Its well crafted using strong colours and importantly it is highly visible  just Google it. Look at the neat pictures you get of tourists posing with the physical 3D models of the logotype they have built around the city at various locations  a way to bring the identity to life. The films Ive seen for the city using the new identity are also equally engaging and nowadays, as we all know, film is key in connecting quickly with an audience and delivering a complex message simply. The verbal identity for I amsterdam could be more developed but overall the identity work is very strong. 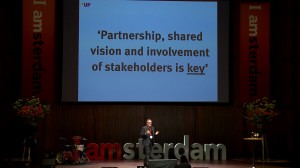 Infrastructure Beginning in January 2013, Amsterdam has taken the important steps of merging its tourism and inward investment organisations into a single group. Now this is really important  to get focus with a single organisation promoting the city brand. Its something Stockholm did early on, about the same time we launched the Capital of Scandinavia brand so it had one united brand and identity being marketed by one organisation. Makes a lot of sense. Planes, Trains and Automobiles (oh, and dont forget the ships) One of the real strengths Amsterdam has is its incredible  and I would even use the word enviable  geographic location. It is really at the crossroads of Europe. This has given the city a fantastic infrastructure potential with Europes fourth busiest airport, Amsterdam Schiphol with over 50,000,000 passengers a year and with more than 120 intercontinental connections alone. Added to this they also have a really usable rail network. Now I know the Dutch complain about their rail network all the time  and more about that little habit later  but they should go and take the train in the UK or the US … then they would really have something to complain about. Amsterdam also has a large and busy port, and on top of this, an extensive although heavily congested road network. Importantly they are connected in another equally important way as well. Digital Connectivity One thing I look for, personally, in cities when I visit is great and free broadband access and Amsterdam is digitally turned on. At UP we depend on being online and having free access to digital where-ever we are and thankfully more and more places are falling in line with that mentality. Well Amsterdam is a really wired city. You get one hour free wi fi usage at the airport, my hotel had super fast, and free, wi fi and all this is powered by the Amsterdam Internet Exchange, AMSIX, making the Netherlands one of the most digitally connected places on earth. Now thats my kind of place. Tourism Attractiveness When it comes to being a tourist and having things to do, see and visit, I really like the choice on offer in Amsterdam. It has around 100 museums and more than 70 art galleries. Top of the list of museums is the recently re-opened and spectacular Rijksmuseum, with, not far behind, the Anne Frank House and Museum. The city also has great shops, restaurants and of course the coffee shops. Interestingly if you go in the coffee shops expecting to see locals puffing away, the only people in there seem to be foreign tourists. The city also has a large number of festivals, mostly with only a domestic audience focus, and it does seem like theres an opportunity to bring these festivals together under one umbrella and create a stronger, more international package. Look to Edinburgh I say. The other thing I like about Amsterdam as a tourist is that its very walkable, you can really get around the centre on foot easily but if you do have to go a little further there are always the trams. High marks for tourism. Architecture We live and work most of our lives in buildings. Architecture can fundamentally affect how we feel about life and certainly our cities. Amsterdam has a really interesting mix when it comes to architecture with strong urban renewal redevelopment, an interesting but a rather eclectic mix of modern architecture, such as the Muziekgebouw and the spectacular new film museum the Eye Film Institute. And of course there is also classic Amsterdam with the canals and canal houses, dating back some four hundred years, and on a sunny day, when the sun is actually out, it is simply wonderful. 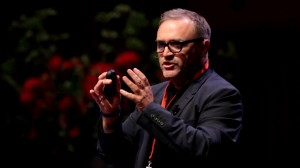 Julian Stubbs talking at the I amsterdam partner marketing day